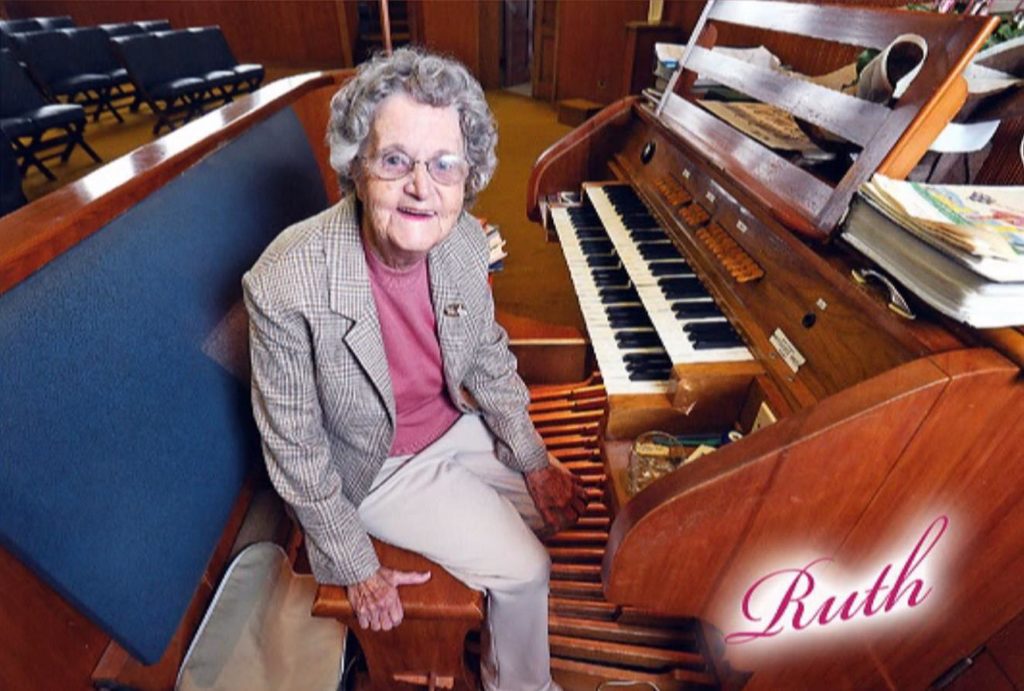 As a teenager after answering an advert for a city church organist in 1946, Ruth commenced playing the organ in the Christian Science Church, then located in Wakefield Street in the city.

Whilst playing for the Wednesday night testimony meetings during this wartime period, she was so impressed with the testimonies given that she eventually made the decision (two years later in 1948) to become a member herself.

She was a Foundation member when the current church on North Terrace opened in 1956.

As a musician, Ruth bought to this post a great love for her work.  Using all her musical knowledge and ability and with great care, she selected each week, music appropriate for the pre- and post-ludes for each Lesson sermon subject on a Sunday.

With her vast knowledge of the Adelaide music scene she was instrumental in finding the church many new organists and soloists during her years of service.

When not playing for the main service, Ruth served in a number of other positions including Sunday School organist, Sunday School teacher and assisting in the Reading Room and book shop on a Wednesday evening. She served as a member of the Lecture committee, and again when not playing, helped with ushering at Church services and meetings. Her increased understanding of the Bible led her to teach Religious Instruction in schools  –  a recognised activity in those days. For many years she was also an active member of our Welfare Committee, assisting older Christian Scientist to stay in their own homes. She was also an unofficial member of the music committee right through to her retirement in 2013.  In this capacity she assisted the small music committee to select a solo for each week’s Lesson sermon, with great consideration for each of the four different soloists’ vocal ranges and abilities.

A special presentation was made to her at an Open House Concert in May 2014.  A Messenger Press reporter was in attendance –  resulting in the publishing of an article in the Eastern Courier Messenger about her career in the church.

Throughout  life’s journey she always relied heavily on her faith in God.

There have been many folk dedicated to their chosen love. For Ruth from about the age of 17 to 87 when she retired –  her 70 years of service is a pretty good record of dedication to her chosen faith and love.  Not that she ever stopped! It can certainly be said of Ruth that she faithfully gave readily of herself to her Church and music and has blessed so many with her sincerity and love.

She might be out of sight but certainly not out of mind.

I sympathize with those who mourn,

that life is not lost;

its influence remains in the minds of men,