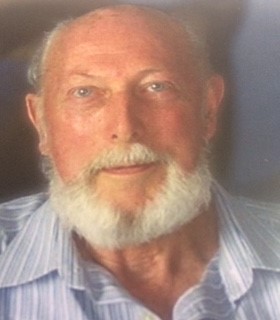 After completing secondary school he was called up to the R A F as part of compulsory National Service and was stationed in central Germany on a top secret listening post, checking up on Russia (this may explain his interest in spy-thriller novels). He spent 2 years at various postings within Germany

In mid-1962 John and a friend Ken decided to drive to Australia in a 10 year old VW beetle purchased specially for the trip. This adventure resulted spending  the next 3 months driving 20,000 km across Europe and down through, India, to Bombay. They took a ship for a 2 week journey to Freemantle. It was at a farewell party at the end of this trip, held after the apple and pear picking season had ended in the Adelaide Hills that John first met Marie.

As destiny would have to wait John returned to England and started a new position as a computer programmer. A couple of years later, whilst living in London, a chance meeting up with Marie again resulted in them staying in touch for the next 39 years!

They married in 1967 and moved into a small flat in West London.  The following year when they were expecting Philip they purchased a house boat moored on a quiet stretch of the Thames with very few neighbours – except for the Queen as the boat was moored opposite Windsor Castle estate.

Family of 3 returned to Adelaide in July 1969 and took up residence in Heathpool  and later Burnside where Sara was born the following year.

The 80s were dominated by school, teenage children and home improvements where John would often retreat to the solitude of his man- 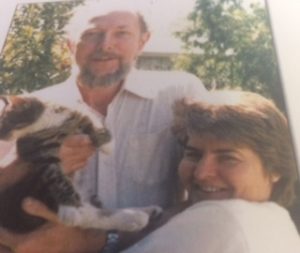 cave in the garage.

The 90s found John and Marie not downsizing but upsizing to the Albert Mill in Nairne.   Here they turned a run down 3 storey mill into a home, antiques shop and restaurant and later adding B&B accommodation and hiring the gardens out for weddings.

It was often hard work but John loved the 14 years at the Mill.  He got great satisfaction from the restoration of bargains found by Marie at the auctions, the interactions with the regular customers and seeing the surrounding land transformed from a dry paddock to the lawns and cottage garden.  John was involved with the Nairne Traders Association helping to organise the Xmas street parties as well as taking photos of Nairne and producing a Nairne postcard for local businesses to sell.

Whilst negotiating the sale of the Mill, Marie’s sadly passed away June 2004 and John moved into a new property in Aldgate. The move to Aldgate very much suited John as it resembled in many ways to an English village.

His constant companions then became cockatiels with the last one named Lexie, who had the run of the house and kept John company, sitting on his shoulder while he selected the readings for a service or put in order the treasurer’s report. John loved his bush garden and all the visits by numerous animals and birds. He would often quietly sit by the window reflecting on the beauty around him.

He too was fortunate indeed that in moving to Hillside Road, he also moved into an embracing community. His garden was connected with a little wooden gate to the house next door, through which over the years, John enjoyed the companionship of his neighbouring family often swapping recipes etc, enjoying the animals and shar 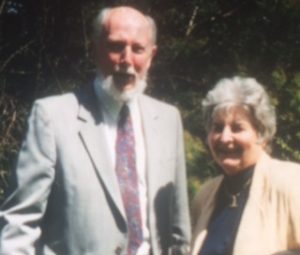 ing in country walks and morning teas with his cakes and celebratory ‘cuppas’.

John continued his family history research including a trip back to the UK in 2005 and by mid 2007 had also become a proud grandfather to four grandsons.

It was around 1972 that John became a member of the Christian Science Church in Adelaide taking on ushering, house committee all leading to greater involvement.

In the early years of his 50 years as a member he attended church with Marie, whilst  Phillip and Sara were in the Sunday School.

He served, at some time, in all the positions available as a member. His gentle, quiet nature endeared him to all and he bought these qualities to services on Sundays and meetings on Wednesdays. His diligence in researching the Scriptures and studying the writings of Mary Baker Eddy provided a rich spiritual presentation.

As Treasurer he gave to this office achievement, accuracy and dedication. He regularly served in the Church Book shop and Reading Room, quietly ministering to the needs of those who came in. He never let any visitor go without ensuring that their needs had been met. No call for help ever went unheeded and he would stop and attend to that call without hesitation

Apart from missing his warm and inclusive presence, we will miss his beautiful photographic calendars and delicious home-made Anzac biscuits, which he always contributed to the Sunday fellowship gatherings.

John, this gentle man always left a calm presence with whoever he met. We, the members of this church, are richer for knowing him and for him counting us among his friends.

Dad had a strong work ethic.  He believed that nothing worth having was ever achieved without effort – but importantly he worked as hard, if not harder, on life away from his day job.  I think Dad had a good handle on work-life balance before it became something that experts told us we needed.

He was gentle and peaceful.  Dad was slow to anger, slow to criticise others and always considered other points of view.  Dad had a gentle and calm nature that I rarely saw ruffled except in defence of loved ones.

Dad was fiercely independent.  Dad was active to the last of his days and valued his independence very highly.  We rarely, if ever, argued – although we did have many discussions about whether he should still be carrying out repairs in the ceiling space.  He would agree with my logic but he would then continue doing it anyway.

There were many things that gave Dad enjoyment. Not least his family and friends, his bushwalks, his cars.

He had a love of books and reading.  Dad was a voracious reader. With any spare time, Dad’s default position was to pick up something to read.  He always had a book or two on the go.

He liked being thrifty.  Dad’s ability to stretch a dollar was almost unparalleled – although Mum gave him a run for his money.  I have to say was convenient to have some of his Scottish heritage to blame.

He loved learning new skills.  Dad was always willing to try his hand at something new from making animated movies, to woodworking, baking, running a B&B and even grappling with new technology.

About 2500 years ago a Greek author wrote “What you leave behind is not what is engraved in stone monuments but what is woven into the lives of others.”  Dad was always there to provide guidance.

John sadly passed away on August 10 in the presence of his family. He is now on his “next adventure”.