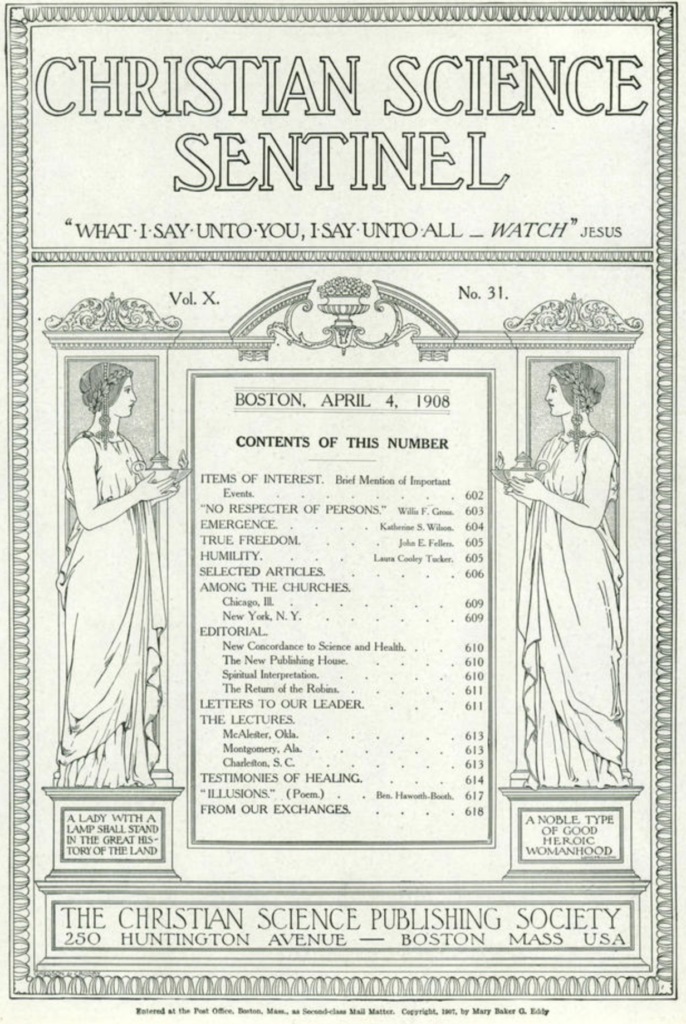 From around 1904 to at least 1915, there was a weekly section in the Christian Science Sentinel titled “From Our Exchanges”.  It contains snippets from other religious publications of the time on current religious thinking of the time.  There were usually 4 or 5 small quotes in each edition of the Sentinel.  This one of April 4th 1908 has some interesting bits and pieces.

As one listens to the babble of voices which come up from various churches and the multitude of organizations, all of which are claiming the authority of the gospel for their existence and exploitation, the question cannot be pushed aside: “What is the gospel?” It surely is not organized churches. Many people seem to think that they have accepted the gospel when they have consented to unite themselves with some church, to be baptized after some form and contribute in some measure to the support and maintenance of the institution with which they have allied themselves. Now the church may have, should have, for its object the spread of the gospel, but it is not the gospel. The man may accept the conditions of membership in any of our churches and still have nothing of the gospel, either in his integrity or feelings. The intention of the church is surely the proclamation of the gospel, either by declaration or example or both. It is easy to see how these may be lost sight of in the endeavor to exploit the organization.

To all Christ’s brethren temptation approaches from without and knocks at the door; resistance or surrender hangs on the inward decision. Men are impregnable so long as they keep the gates barred; when they fall, it is because a hand within has opened the way into the stronghold. The decisive temptation does not always come like a sudden thundering of the enemy at the gate; it comes oftener after many a summons to surrender, many a fair promise, many a seductive offer. Men who have kept the gates barred resolutely do not suddenly capitulate; it is only as the result of gradual lessening of vigilance that the great betrayal comes. When a man of high reputation suddenly falls with a resounding crash, like a great tree on a still night, it is because a hidden rottenness has been silently eating out the heart of his strength.

There can be no question that healing was a prominent and not merely an incidental factor in the ministry of the primitive church. Christ’s first words in his commission to his disciples were, “Heal the sick.” Matthew’s account of his choosing his twelve disciples says that he gave them authority “to heal all manner of diseases and all manner of sickness.” After his resurrection, those who went forth to preach his gospel included in it the promise of healing. They prayed that they might “speak thy word with all boldness, while thou stretchest forth thine hand to heal.” Many in the early Church had gifts of healing. We do not believe that the Church of our time has wholly lost her Master’s power to impart health to the bodies as well as the souls of those who come to him to be saved.

Do not argue if you would convince. Tell that which you know. Show its truth not by contention but by example. Be so sure of something true, that you exhale truth in every word you utter. Better a little truth you are sure of than a great deal for which you must furnish authority.

The matter of sickness and suffering has so large a bearing upon our happiness as to merit serious consideration. To acquiesce in them as a necessary accompaniment of life is a procedure man will not unconditionally adopt.